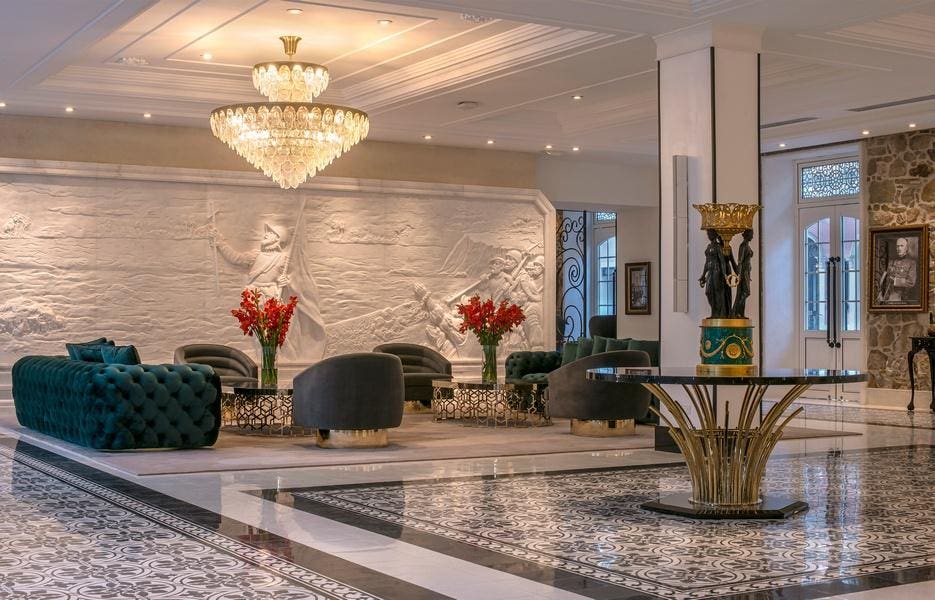 Hotel La Compagnie, which opened in April this year in Panama City’s bustling old town of Casco Antiguo, has a rich history dating back to the 17th century when it was built as a Jesuit convent. The first hotel in the Unbound Collection by Hyatt portfolio in Central America, Hotel La Compañía offers luxurious rooms, five restaurants, a rooftop bar and lounge, a spa and a rooftop infinity pool. Surrounded by three of the most famous and historic churches of the Casco Antiguo, Hotel La Compañía offers its guests the ideal location for an authentic cultural holiday experience.

The hotel’s Exilio Bar — named after Spain’s King Carlos III’s secret exile order to expel the Jesuits in 1767 — released a signature cocktail called The Albayalde as an ode to the neighborhood’s historic past .

Legend has it that when Henry Morgan’s pirates took control of Panama La Vieja (Old Panama City), Jesuit priests of the Order of St. Augustine painted the church’s precious gilded altar black. with thick layers of “albayalde” to make it look like plaster. The idea saved the famous altar from ruin, and today it stands in the San José Altar de Oro Church, located opposite the La Compañía hotel.

The new craft cocktail celebrates Casco Antiguo’s most famous legend and tops the signature cocktail menu at Exilio Bar, the hotel’s elegant lobby lounge. With Licor 43, an infusion of ginger and aged rum, L’Albayalde is served in a martini glass with lemon, thyme and a garnish of pink pepper.

“To create a cocktail that accurately captures the essence of the church’s history with albayalde, we had to infuse aged rum,” says executive chef Luis Artigas. “The base of the cocktail brings an earthy flavor, and its garnishes bring a crisp, modern taste to the drink – very representative of the hotel’s catering.”

Located at the center of Casco Antiguo’s dining and entertainment scene, Hotel La Compañía’s robust, chef-led dining and beverage program delves into the region’s rich flavors. The hotel’s dining experiences range from a casual café and coffee bar to a modern and refined French restaurant with a 300-year-old wine cellar, as well as an international menu unrivaled at El Santuario, which offers a menu with authentic Panamanian dishes. , Asian and Indian dishes.

“Hotel La Compañía is entirely built around its history,” continues Artigas. “Across all menus, Casco Antiguo’s history of exile, immigration and colonization inspires our selective choice of ingredients, honoring the colorful history our location has survived. With Le cocktail Albayalde, we wanted to tell the story of a pivotal moment in the city’s past.

The American wing of the hotel, which opened this month, will include three additional restaurants opening later this summer with immersive programming. The American Wing’s rooftop bar, Capella, is already a favorite nightlife spot for locals and visitors alike.